Please leave a Review to support my business.

Report a problem with this listing

The Europeans were also doing cupping to treat many diseases.
he difference between the Arabs or Muslims and others in doinghijama was not hidden since while believers were more interested to do hijama as the Sunnah of the Prophet (saw) (without questioning about anything), whilst others were doing it as a pure medical benefit.

The first and top-level benefit of hijama for a believer is the reward he or she will get, both in this world and the hear after, by following a stressed Sunnah of the Prophet (saw). Not only the believers but also anyone can openly observe or experience the benefits that are bestowed on the followers of the commands of Allah (swt) and His Prophet (saw). On the other hand, when we look at this bloodletting technique from a worldly perspective, we can find hijama has many benefits.


It is noted that hijama promotes the flow of energy in the blood. It removes toxis and other waste material from the blood. Which helps a speedy recovery time from all forms of illnesses. Hijama is known to prevent many diseases and, therefore, can be considered one of the best preventive measures against many diseases. Moreover, it is also noted that hijama can help those people as well who are under some magic spell or who are under the influence of some evil beings.


Hijama has no side effects as long as performed properly. It is also worth noting that about 70% diseases or disorders are caused by the failure of blood to circulate properly in the body. Furthermore, we get sick or our body organs fail to perform healthily when our blood keep circulating loaded with toxins and other impurities. Unless the toxic waste is removed from the body or from the blood, not only we do not recover fast from a disease but also become easy victim to other diseases or disorder. Hijama is the best way to remove the toxic waste from the blood stream, and the results will obviously be a healthy and properly functioning body. We should never forget that this highly useful and recommended Sunnah of the Prophet SAW helps us in controlling many diseases such as infections, hypertension, circulatory diseases, pains, infertility, cancer, etc. 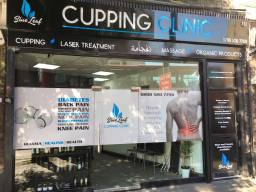 Is this your business?

Show me directions to Hijama in london